A linear regression line has an equation of the form Y = a + bX, where X is the explanatory variable and Y is the dependent variable. The slope of the line is b, and a is the intercept (the value of y when x = 0).

Suppose, data about Temperature is as given below in Table - 1 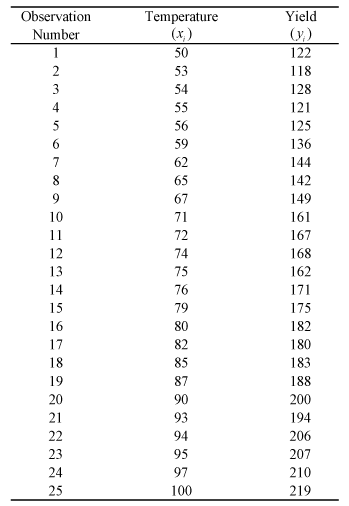 We can obtain scatter plot of given data in Table - 1 in Cartesian coordinate system as show in Plot - 1, 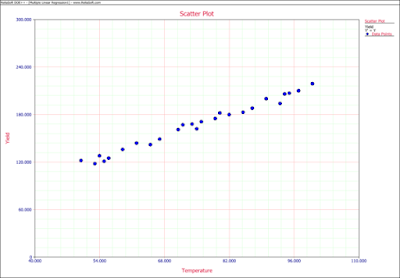 It is clear that no line can be found to pass through all points of the plot. Thus no functional relation exists between the two variables x and Y. However, the scatter plot does give an indication that a straight line may exist such that all the points on the plot are scattered randomly around this line. A statistical relation is said to exist in this case. The statistical relation between x and Y may be expressed as follows:
Y =  B0 + B1*x + e

The above equation is the linear regression model that can be used to explain the relation between x and Y that is seen on the scatter plot above. In this model, the mean value of Y (abbreviated as E(Y)) is assumed to follow the linear relation:

E(Y) = B0 + B1*x
The actual values of Y (which are observed as yield from the chemical process from time to time and are random in nature) are assumed to be the sum of the mean value, E(Y), and a random error term, e: 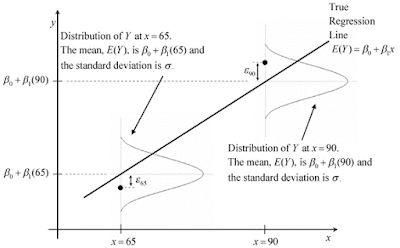 for an observed data set. The estimates,

, is called the fitted line. The least square estimates,

, are obtained using the following equations:

is the mean of all the observed values and

is the mean of all values of the predictor variable at which the observations were taken.

are known, the fitted regression line can be written as:

is the fitted or estimated value based on the fitted regression model. It is an estimate of the mean value,

, for a given value of the predictor variable,

, may be different from the corresponding observed value,

. The difference between the two values is called the residual,

The least square estimates of the regression coefficients can be obtained for the data in the preceding Table - 1 as follows:

Knowing both the coefficient ,the fitted regression line is:

This line is shown in the Plot - 3 below. 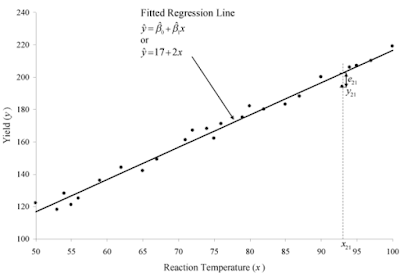 Now, we can predict value of Y for any given value of x by just putting the value of x in Regression Line.